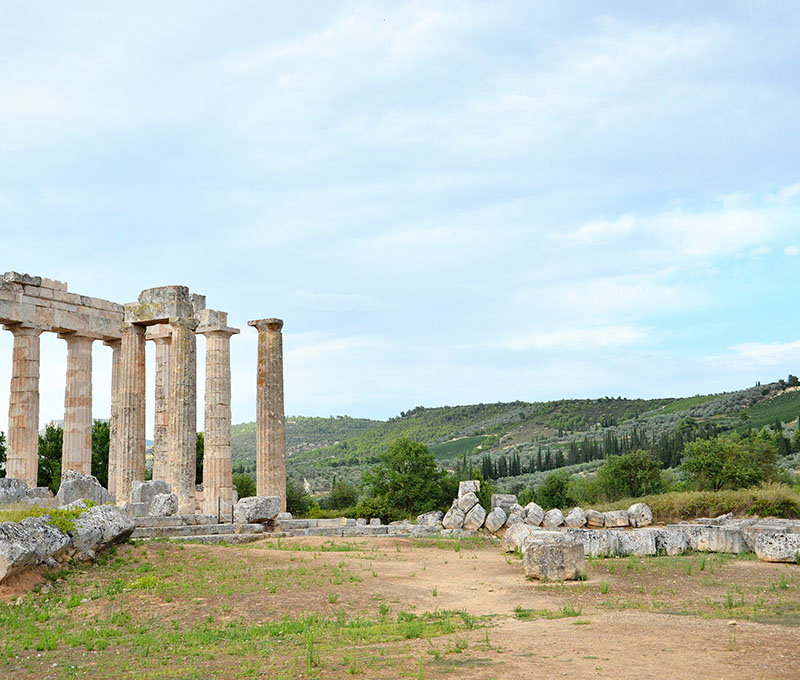 A Few Words About Our Land

Built in an elevated valley of Corinth, in an area full of vineyards and olive trees, Ancient Nemea has deep roots in myth and history. According to mythology, here Heracles made the first of his labors, killing the lion of Nemea, who suffered fear in the area. Indeed, the greatest of Hellenic heroes, after the lion has drowned, managed to remove his lioness and wear it as a coat. Here, too, was found tragic death the small Ofeltis, son of Lykourgos, king of Nemea, and Eurydice. The slave Ipsypylis, to whom Lycurgus had been entrusted with the care of his son, left the infant on a layer of wild selery in order to give water to the Seven on Thebes. A snake bites the litlle Ofeltis and he tooks his life, a fact that verified an earlier prophecy of Pythia. The death of Ofeltis, was connected as a the founding legend of the Nemean Games, as far as we know from the ancient written sources, from 573 BC, alternating with the sacred Panhellenic games of Olympia, Delphi and Isthmia. The area and the games were apparently under the control of the Cleonians, but Argos was the dominant one. Nemea was destroyed during the Peloponnesian War and the place of the games remained deserted for more than seven decades. During this period the games took place in Argos, and returned to Nemea in 330 BC, as demonstrated by the implementation of an extensive building program (possibly with the involvement of Philip and Alexander the Great), which included the temple of Zeus at the early Hellenistic Period. In 271 BC the games were transferred back to Argos.

When Pausanias visited Nemea around 150 BC, the temple of Zeus was already dilapidated and without its devotional statue. The most important building of Nemea's archaeological site is the Temple of Zeus, the god of shepherds and livestock, who must not be identified with Olympia Zeus. The temple, one of the first ancient buildings that combines all three architectural styles (Doric, Ionic and Corinthian), was built around 330 BC. Use a preable, alcove and, in the depth of the alcove, instead of an back room, a small underground sanctuary-cave, possibly a place of worship of Ofeltis. The temple of Nemean Zeus is located in the center of the sanctuary of Zeus, which included a series of buildings and monuments that were related to the worship and sporting events of the ancient games. The stadium of Ancient Nemea was constructed during the Early Hellenistic Period around 330 BC. The total length of the stadium at Nemea was 178 meters, as opposed to Olympia, which was 192 meters. It is noteworthy that only the first winner of the matches was recognized, while the second place and the last place had the same value.